Cameron Trost is a writer of strange, mysterious, and creepy tales about people just like you. He is the author of Hoffman’s Creeper and Other Disturbing Tales and The Tunnel Runner, and is the creator of Oscar Tremont, Investigator of the Strange and Inexplicable. He hails from Australia but now lives on the rugged coast of Brittany. Castles, forests, storms, and whisky are a few of his favourite things. His story “Mrs Partridge’s Pussy” was published in Guilty Pleasures and Dark Delights.

Tabatha Wood invites him deep into the Well to discuss what makes his writing unique to him, which fictional character he’d like to have a coffee with, and the biggest lesson he’s learned as a writer. 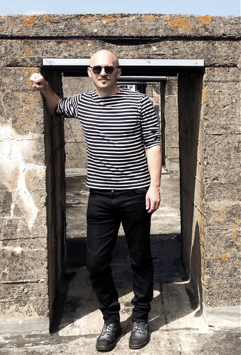 G’day, Cameron, please come in and make yourself comfortable. Ignore the bloody mess in the corner, I think that was the Creature’s last meal…

What three themes make your writing instantly recognisable as yours, and yours only
Storms. Hidden passages. Whisky.

If you could go for a coffee with any fictional character (including one of your own) who would you choose and why?
By no means an original answer, but I’d have to say Sherlock Holmes, the character for fans of mystery fiction, and arguably for fans of suspense and horror as well. Doctor Watson recounted so many of his adventures to an eager public, but I’m sure over a cup of coffee (even though it’s not Sherlock’s preferred stimulant) he would be happy to share one of his hitherto unknown cases with me. I’d also like to drink a whisky with my own detective, Oscar Tremont. As his creator, I already know more about him than anybody else, and yet I can’t help feeling I would gain so much more insight into him if we could meet tête-à-tête.

How do you want to be remembered?
The world of writing today is so different from thirty years ago, let alone a century ago. The rise of small press publishing and self-publishing, enabled by POD technology and ebooks, has changed the game. This means there’s now a vast and deep ocean of writing out there, some shallow, some profound, some spectacular and wild, much of it stagnant and polluted. The horror legends of the past like Edgar Allan Poe and H. P. Lovecraft probably wouldn’t even make much more than a ripple these days. Stephen King, Clive Barker, Graham Masterton, and Ramsey Campbell were most likely the last of the big names in the genre. It’s hard to imagine individual authors becoming so well-known for so long these days. So, in short, being remembered at all would already be an impressive achievement. I guess I’d like to be remembered for what I write best; short mysteries and suspense stories with a nasty twist at the end. More specifically, I hope Oscar Tremont finds a place in every list of great fictional detectives. I know he deserves it!

What inspired your story for Guilty Pleasures? Is there a story behind the story?
There is absolutely no truth behind “Miss Partridge’s Pussy”, I swear. What inspired it? I’ve probably read too many of Roald Dahl’s quirky tales, but ultimately it was the anthology title. I thought about a guilty pleasure, and decided to give it an everyday suburban setting. I wanted it to be plausible yet almost unthinkable. The idea grew from there.

What’s the biggest lesson you’ve learned as a writer?
Don’t rush to get a story out there when it’s not ready. The world is full of half-baked stories and even major publishing houses release books with printing errors every tenth page. Take your time and do your tale justice. If it doesn’t deserve time and effort, it doesn’t deserve to be read. Simple.

What do you think is your biggest obstacle when it comes to writing?
I never have writers block, so that’s not an issue. There are three obstacles; the day job, housework, and family. I resent the time taken up by the first two, but that’s life. The best thing about not having much time to write is that when I have time, I love every second of the process.

Do you have any upcoming books/work which you’d like to mention? Or previous works which you’d like to draw attention to?
I’m currently working on the next anthology to be released through my publishing house, Black Beacon Books; https://blackbeaconbooks.blogspot.com It’s a mystery anthology. We’ll also be opening for submissions in 2020 for an anthology called “Murder and Machinery”. As for my writing, I’m putting the finishing touches to my second novel and looking at potential publishers, writing more Oscar Tremont mysteries, and my second short story collection is ready; I’m waiting for the last short story in it to be published (“Cleopatra’s Mystery Box” forthcoming in Nefariam: The Element of Crime, ID Press). Once rights have reverted to me, I hope to have the collection published. You can also read a little more about me and my books at my blog https://trostlibrary.blogspot.com/.

Thank you, Cameron, I wish you very well with your writing goals, and thank you for braving the Well. It looks like the Creatures are getting hungry again, best leave now while you still can!